Ciamhie took part in Haven’s Build It Week in November 2012.  Here, in her regular updates from the site, she shared her experiences and all the progress made by the teams of volunteers.

Hard to believe that, this time last week, we were standing in 40 degree heat, probably covered in splatters of paint with an abundance of freckles and sunburn, and with sweat dripping of us, fighting tears and tiredness!  But, without a moment’s thought, I’d go back in the morning and I think all my fellow volunteers would say the same: what a rollercoaster of a week!

On Thursday morning, the day began as usual and the little routine we had developed during the week brought with it a welcomed sense of familiarity.  By lunchtime, temperatures had soared into the high 40s, reaching as hot as 49°C at one stage!  It was HOT, but, with so much work left to be done, it was a unanimous decision to stay on the building site an extra hour that evening to get more done, ensuring that all the houses were finished by our Friday deadline.

By Thursday night, we were all exhausted when we learned that we were to have a surprise performance by none other than the legend that is Garth Brooks.  The campsite went bananas as the familiar sounds of “Achy Breaky Heart” and “Friends in Low Places” were belted out from the stage, before Trisha Yearwood joined Garth onstage for a few tunes.  Everyone was on a high and ready for the final day’s work going to bed that night!

Arriving on site on Friday morning felt different than every other morning. Everybody was anxious to get the last of the work on the houses done so that we reached our target of building 100 houses in the week, yet none of us wanted the week to be over.

Our homeowners who had worked with us on site, Sophonie and Juvenka, were part of the family by the end of the week. Sophonie used to meet us every morning with a huge hug and a smile, and, indeed, hugged us all at any opportunity during the day!  They worked side by side with us for the week, and their faces lit up when they saw the progress they were making.  Both took particular liking to the painting, and, indeed, we were all shocked and a little jealous when we saw the incredible strength Juvenka showed when hammering in the bloody hurricane clips we had all come to hate so much! That girl had a special way with a hammer which took us all by surprise, considering her tiny frame!!

Sophonie told us how she was moving into her house with two of her four children and three grandchildren; her other two children would be sharing another house on site with their families, whilst Juvenka would be moving in with her husband and two year old child.  She was also expecting her second child and, although she was suffering with morning sickness throughout the week, she soldiered on with a smile on her face!

By 2pm, it was time for Jimmy and Rosalynn Carter to hand over the houses to the homeowners, when they were gifted with a bible each and thanked for welcoming us into their community and their lives.  We finished off the last few touch-ups to the houses and then, together, as a team, had a dedication to each of the homeowners and their new homes.  With their permission, we signed our names on the inside roof of the house so that, even when we were gone, there would be a little bit of us still there with them.  These incredible women will always be a part of us and, as we said our goodbyes at the end of the day, emotions got the better of us; when Sophonie started to cry, the waterworks opened up for all of us.

With tears streaming down our faces, we turned our goodbyes to the dear, dear children who had become our pets for the week, in particular Madeline, Davidson and my own little pet, Elvents.  Through broken French and sign language, we explained how this was our last day here with them, and we had to leave them, but that we loved them all and we would miss playing with them.

With our hearts in our mouths and tears flowing down our faces, we took off on the short walk back through the site to the gate where the buses were.  As we walked along in emotional silence, I felt a little hand sliding into mine and looked down to see little Elvents clutching my hand, as we walked along side by side as far as the gate, where he could go no further.  He wrapped his arms around my legs and gave me one final hug before letting go and waving goodbye.  This memory will stay with me forever and, even as I write this, the tears are flowing again.  In just one short week, this little eight year old boy had captured my heart.  What does the future hold for him in Haiti?  If I could have brought him back to Ireland with me, I wouldn’t even need to think about it.

The people of Haiti, particularly the Santos community, are a special nation.  They have taught us so much throughout the week.  These children continue to smile, laugh and, most importantly, hope.

These phenomenal homeowners, especially Sophonie and Juvenka, who lost everything through one natural disaster after another, continue to be thankful for the little they have.  It is my dream to return some day and see them all again.  They will light up my life for many many years to come.  I left a part of my heart in Haiti, but would I go back?  In the morning!

I thank each and every one of the Haitians I met for allowing me the honour of being part of their lives. They will never know just how much they have given me and for that I will be forever grateful.  Tonight, I sleep with dreams of Haiti.

On a final note, I just want to thank everyone whose generosity and support allowed me this incredible experience.  I really can’t thank each of them enough.  Huge credit also to the Haven team Orla, Cathy, Bo, Suzanne, Antonia, John, Frank and, of course, John Henry and all his crew whose trojan work made it all possible. 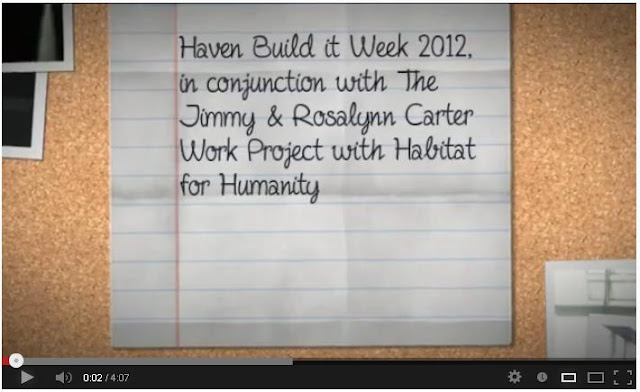 Please help support ongoing projects in Haiti and give a donation no matter how big or small!

Please note, all views and comments are Ciamhie’s own and not that of Haven.

Sophie O’Sullivan arrived in Haiti two weeks ago to begin a three-month internship...